This project consisted of the conversion of a grade-II listed hotel near the Royal Albert Hall in London into 18 luxury apartments and two mews houses. The development was formed within the existing seven-storey building façade. The project also included the refurbishment and extension of existing mews houses located behind the hotel into luxury three-bedroom, two-storey mews houses. The architect contacted us as the designer wanted the interiors of these apartments and mews houses to have modern appliances and high-end finishes throughout and the designer thought that illuminated splashbacks met that criteria. All the kitchen cabinetry is white and the designer wanted the splashbacks to be illuminated with white-only LEDs. Following several site meetings and surveys, we produced the splashbacks for this development – some of which had to have additional design work carried out on them as they had to fit into the eaves of the building. As the splashbacks just have white LEDs in them there is no need for a colour control unit and the splashbacks are switched on and off via the main electrical circuit in each apartment or mews house. Installation was carried out by a two-man team over quite a period of time as there were considerable delays with the refurbishment, but the end result is a cool, calm effect in these high-end residences and these images show the splashbacks in both occupied and unoccupied apartments. 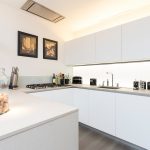 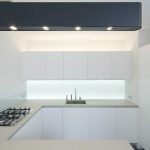 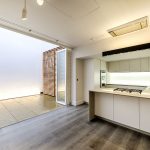 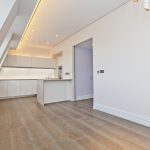 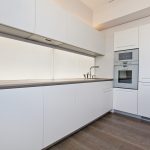 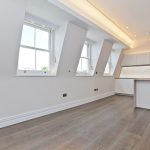 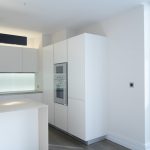 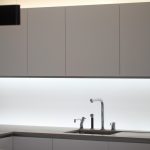