We were contacted by an architect to see if we could help solve a problem – their client wanted a large illuminated white graphic on a black background installed in the reception area of their new offices. This had been attempted by two other companies but unfortunately they had not been able to achieve what the client required. The design we put forward was to edge-light glass panels with an image sandblasted to the rear of the glass panels and then mount them in front of a black panel. The architect presented our design to their client who was very happy with our proposals and we were given the go-ahead. We had 20mm thick (at the client’s request) low iron, toughened glass panels produced with the image sandblasted to the rear of each panel. We also had bespoke high output white LEDs produced so that they fitted the top and bottom of the glass panels. Whilst this work was progressing, we worked closely with the interiors company on the design of the carcass. The installation was on the ground floor which made access easy and the only logistical issue we had to address was the lifting of each glass panel as each one weighed over 80kgs. We were only allowed one day to carry out the installation (which was done by a 4-man team) but unfortuantely the surround and back panels were not ready (they should have been fitted before we got to site) so we had fit the glass panels without them being fitted. We were given a 6-week lead time for this project, which we met. These photos were taken during the installation (due to security reasons we were not able to return to take photos after installation). 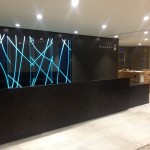